Pauli Murray Honored as a Saint of the Episcopal Church 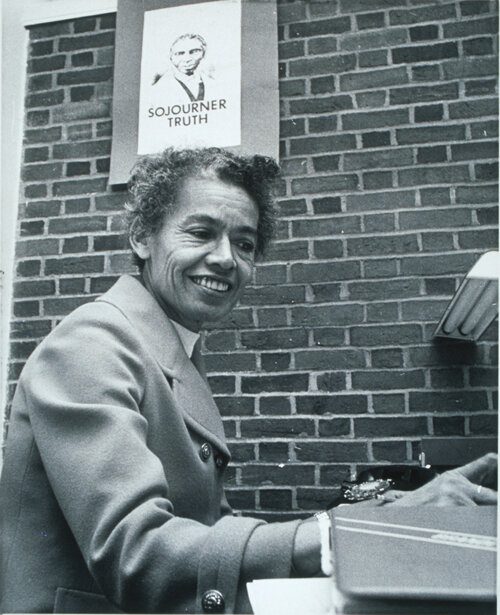 “Hope is a song in a weary throat.” (Pauli Murray)

On July 1 we honored Pauli Murray as a saint of the Episcopal Church. She is the first African-American Episcopal priest who is also a supporter of civil rights, women’s rights, LBGTQ rights, and poetry.

“Her throat may have been weary, but she kept on singing her hope and turning her music into law and love” Bob A.

First, here is a deeply felt poem written by Murray:

I sing of a new American

Separate from all others,

Yet enlarged and diminished by all others.

I am the child of kings and serfs, freemen and slaves,

having neither superiors nor inferiors,

Progeny of all colors, all cultures, all systems, all beliefs.

I have been enslaved, yet my spirit is unbound.

I have been cast aside, but I sparkle in the darkness.

I have been slain but live on in the river of history.

I seek no conquest, no wealth, no power, no revenge:

I seek only discovery

Of the illimitable heights and depths of my own being.

Murray was the child of kings and serfs, a descendant of both slaveholders and enslaved ancestors. Once she became ordained, she offered communion in a North Carolina church where her grandmother had been baptized as an enslaved person

Born in Baltimore in 1910, Murray was raised in Durham, North Carolina.  After graduating from Hunter College, she was denied admission to graduate school at the University of North Carolina because of her race.  With that decision, she decided to pursue Howard University Law School; while there she participated in sit-ins in D.C. protesting segregation in drugstores and cafeterias.

Murray graduated from Howard in 1944 and sought to go to Harvard for an advanced law degree.  Again, she was denied admission this time for her gender. At that moment she decided to pursue Berkeley where she received a Master of Law degree in 1945.

In 1948 the Methodist Church hired Murray to research segregation laws. Her 1951 book “States’ Laws on Race and Color”, gave Thurgood Marshall the basis for his legal arguments that won the day in Brown v. Board of Education three years later.

At the same time, Murray was working for racial equality, she was championing gender equality and protesting the double discrimination faced by African-American women. As she wrote;

“Black women, historically, have been doubly victimized by the twin immoralities of Jim Crow and Jane Crow. …black women, faced with these dual barriers, have often found that sex bias is more formidable than racial bias.”

As Bob reports Pauli Murray gets the rousing last word from a 1977 sermon:

“It was my destiny to be the descendant of slave owners as well as slaves, to be of mixed ancestry, to be biologically and psychologically integrated into a world where the separation of the races was upheld by the Supreme Court of the United States as the fundamental law of our Southland.  My entire life’s quest has been for spiritual integration, and this quest has led me ultimately to Christ, in whom there is no East or West, no North or South, no Black or White, no Red or Yellow, no Jew or Gentile, no Islam or Buddhist, no Baptist, Methodist, Episcopalian, or Roman Catholic, no Male or Female. There is no Black Christ,  no White Christ, no Red Christ – although these images may have transitory cultural value. There is only Christ, the  Spirit of Love”.