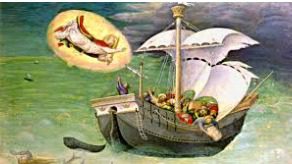 A Piece by Dean Shambaugh,

St. Nicholas is a 4th century bishop of Myrna (in Turkey) who was known for his generosity, particularly in one story of giving gold coins to young children.  Brought to America by Dutch colonialists and immortalized in “the Night Before Christmas,” Saint “Klas” is near and dear to many. However, before he was known as Santa Clause,  St. Nick was known as the patron saint of sailors, with many renaissance paintings showing flying through the clouds in full bishop regalia, protecting ships in storms at sea. He is also known as the patron saint of pawn brokers, archers, and repentant thieves, though how all that worked, I am not sure.

St. Nick’s greatest gift is bigger than all that. As one of the bishops who attended the Council of Nicaea, St. Nicholas was in the center of the debate of whether Jesus was homoiousios (of similar substance with God) or homoousios  (of the same substance of God.)  The difference of the two words is just the letter “i”.  (This is the root of the phrase “not one iota of difference.“)  Theologically, whether or not the “I” is there is huge. St. Nicholas was so passionate about this that legend say that in a decidedly un-Santa moment he punched Arius (the leader of those who argued that Jesus was human and not divine),  thus silencing the heretic and winning the debate. Whether or not this happened, the bishops at Nicaea went on to affirm that Jesus and God were of the same substance, “true God from true God,  begotten, not made, of one Being with the Father.”  St. Nicholas’ greatest gift is not about what is under the tree but about who is in the manger. His greatest gift is the understanding that the baby born in Bethlehem was the word made flesh, that the baby born in the manger was God.

St. Nicholas is telling us that the most important Gospel for Christmas isn’t Luke 2:1-20 (which gives us the story of the shepherds and the angels) but John 1:1-18 (which tells us that Jesus was with God in the very beginning and is the source all light and life in the universe itself). With St. Nicholas on our side, it becomes clear that Christmas is a cosmic event and our understanding of Jesus – and of Santa Claus – might be a little too small.